1. I’m glad to announce that this post was cited here by David Beckworth, former economist at the U.S. Department of Treasury, who recently wrote an amazing post in the New York Times discussing the role of fed monetary policy in the great recession of 2008-2009.

2. You should read this post first, which is the subsequent one (I know that’s weird). In that post I showed that the oil’s decline since June 2014 is mostly due to global demand shocks as opposed to positive oil supply shocks. So now we should ask what caused global demand indicators to deteriorate more than expected since mid-2014. Thas what I do in this post.

Currently, discussions in the financial world revolve around the fall in oil prices; it has dropped roughly 70% since June 2014. What are the causes, everyone is wondering. It is said that the fall is due to the economic slowdown in China, together with an increase in oil supply. In fact, some argue the economic slowdown in China alone explains the phenomenon. This is a fairly weak hypothesis because output growth rates in China during 2014 were in line with trend observed over the years 2006-2013. That is, analysts were not especially surprised by low growth rates in China recorded during 2014 (analysts were expecting a slowdown anyway). Note that prices moves in response to shocks (news/surprises) or changes in expectations. I’m arguing that the actual 2014 output growth rates in China were not that far form expected as to imply the huge fall in oil nor analysts suddenly became pretty pessimistic on the economic outlook for China just in the middle of 2014. The second hypothesis that attributes the drop in oil prices to a positive oil supply shock is also inadequate since not only oil began to decline in middle 2014, so did copper. In fact, in general, commodity prices also start declining around that date.

Therefore, for that hypothesis to makes sense, we would have to argue that the positive oil supply shock (something idiosyncratic to that market) somehow caused the decline in commodity prices. I understand that there is maybe nonlinearity in the effects of oil fluctuations as Krugman noted. This is, a “small” drop may be nice for the economy but a “huge” one may well send the world economy to hell. So it’s possible that a positive oil supply shock may cause a decline in commodity prices through its negative effect on world spending. But this is not the case because right after the oil started plunging (before it had dropped 70%) we saw a slowdown in the stock market and an increase in the rate spread on corporate BBB bonds (meaning higher default risk and/or risk premium which signal a negative nominal spending shock) and the market were not expecting at all the oil would fall 70% in coming months.


Moreover, the crude oil stock do not showed an increase during 2014, but did so during 2015 as a consequence of, you will figure that out later.

So what explains the drop in oil prices, moreover, in commodity prices? Well, something unexpected (a change in expectations) happened somewhere in middle 2014. What happened?

Short story: it was a (contractionary) monetary shock stemming from the Fed; markets expectations on the 12 months ahead short rate (fed funds rate) (changed) began to rise from mid-2014. So the fed started to tighten. Naturally, the nominal dollar began to appreciate multilaterally, which, given the current configuration of macroeconomic policies in China, meant a negative impact on the expected growth of nominal spending in China.


China imported the tight Fed monetary policy; its currency also appreciated against the world, because China has its currency pegged to the dollar and holds large amounts of foreign reserves which give credibility to the peg, at a time when it needed just the opposite given the necessary economic slowdown that was already in progress. China is just too big by itself, let alone its influence on emerging markets; therefore, the negative impact on the expected growth of nominal spending in China (due to the appreciation of the renminbi multilaterally) implies a decline in global prices, including commodity prices (oil, cooper, etc.). Of course, its international reserves had to decrease as Mundell-Fleming would have expected (because of its fixed exchange rate, capital were leaving the country and was expected to cut its short term interest rate!) 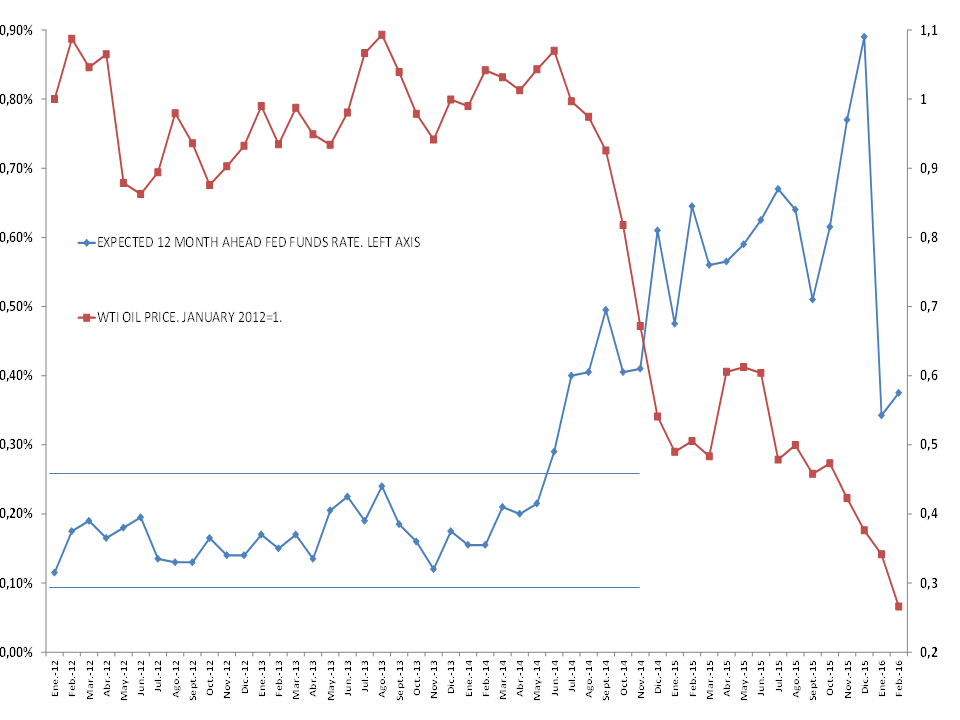 So we don’t really need an increase in expectations on real GDP growth in China or elsewhere or oil producers cutting back production to see a rebound in oil prices. We only need a change in market expectations about future Fed monetary policy.

I think it’s unlikely the Fed is going to recognize explicitly its role on the oil crash but I do think is going to backpedal or invade, wait whaat (getting bored) persuade china to abandond the peg (by now it should be clear that the Fed don’t need to actually change its rate, right?) And when that happens, the oil will rebound. Of course, break-even inflation rates and the stock market will rise too.

PS. There is a common/global risk factor in oil and copper prices. It’s monetary in nature, it’s the Fed! This applies also to, well, almost every risky asset there is.

About me, Andres Ariza M

Hi welcome to my page. I like to study Monetary Policy and Financial Markets. Industrial Organization and Game Theory. I earned a BS in Economics and a Master's degree in Finance at University of Chile.